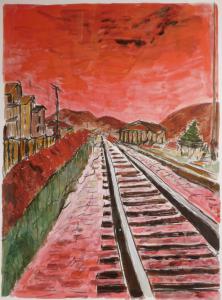 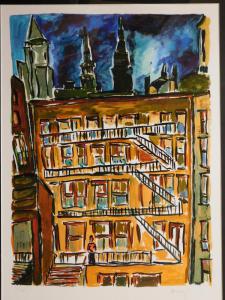 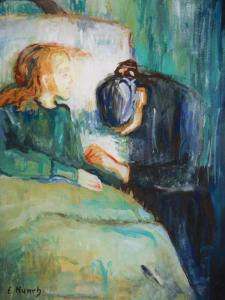 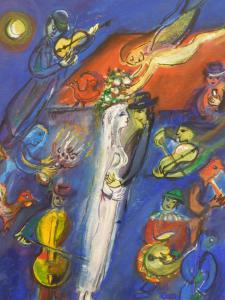 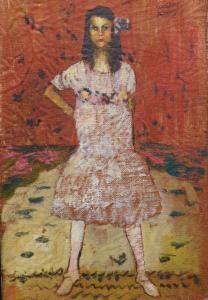 The Bob Dylan print sale was a success, with all lots selling amid brisk bidding.”
— Bruce Wood

FRANKLIN, MASS., UNITED STATES, October 11, 2017 /EINPresswire.com/ — FRANKLIN, Mass. – It’s not often Bob Dylan shares center stage with anyone – certainly not 19th and early 20th century painters – but that’s exactly what happened on September 20th when a collection of 25 limited edition giclee prints signed and numbered by the singer-songwriter came up for bid alongside such fine art luminaries as Edvard Munch, Marc Chagall and Gustav Klimt.

It was a two-session online-only auction, conducted by Woodshed Art Auctions, based in Franklin. Session 1 featured the 25 signed Dylan prints, which all carried estimates of $2,000-$3,000 and ended up selling for prices ranging from $5,312 (for Train Tracks) to a pair of giclees titled Cassandra ($1,250 and $1,062). The runner-up lot was titled Cityscape; it fetched $3,750.

“The Bob Dylan print sale was a success, with all lots selling amid brisk bidding,” said Bruce Wood, the owner of Woodshed Art Auctions. “The Prestige Signature Collection was unusually slow, with only about 20 percent of lots selling. However, several of the prime lots did receive strong bidding. I think the Dylan sale got so much attention, people weren’t aware of Session 2.”

The Dylan prints – all from his Drawn Blank Series of artworks based on drawings done between 1989 and 1992 – certainly did enjoy pre-sale buzz. The circa 2013 prints came from the heirs of a private estate in London, England and all were nicely framed in silver-finish wooden molding, with deep mats and glass glazing. And they were quite large (42 inches by 32 ¾ inches, framed).

The unframed tempera and gouache on medium weight bond paper attributed to Edvard Munch (painter of The Scream, one of the most instantly recognizable images in all of fine art) was titled Study, The Sick Child. It depicted Johanne Sophie Munch, the artist’s older sister. The subject was repeated in a number of paintings, etchings, lithos and drawings done from 1885 to 1926.

The gouache on paper attributed to Marc Chagall was titled, simply, Lovers. It was signed lower right and had a collector’s stamp verso. It is similar in style to his work titled The Betrothed and the Eiffel Tower. Lovers were a common theme for Chagall. Very often the lovers appear to be floating in time and space along with other people, instruments, plants and animals around them.

The oil on tempera painting attributed to Gustav Klimt, titled Girl Standing, was likely a study of a 1912 portrait Klimt did of Mada Primavesi, now housed in the Metropolitan Museum of Art in New York City. Klimt reportedly created several studies of Ms. Primavesi, varying the elements in each. The study came with a certificate from the van Hassel Galleri in Rotterdam, Holland.

Following are additional highlights from the auction. All prices quoted here include the buyer’s premium, 20 percent for live bidders, 25 percent for online bidders. The Dylan prints grossed $48,175. Session 2 grossed $366,750. Internet bidding was facilitated by Invaluable.com.

It’s a tribute to the star power of this auction that a name like Vincent Van Gogh (1853-1926) couldn’t even crack the top three, especially considering there were several works by the Dutch master on view (all signed attributions). They included a tempera and oil painting titled Peasants Working ($38,750); a gouache with pencil and watercolor painting titled Landscape with Houses ($28,750); and a lithographer’s crayon on textured paper titled The Wounded Veteran ($9,062).

The oil and tempera Still Life Study attributed to Claude Monet (1840-1926), executed circa 1867 and signed by the French painter, sold for $37,500 and bears the faint impression of the stamp of Collection Foret in Nice, France. Also, an oil and tempera on canvas attributed to Paul Gauguin (1848-1903), titled Tahitian Woman, signed, with a verso stamp of Theodore Duret, hit $35,000.

Still Life with Fruit and Tea Cup, a tempera on paper work attributed to Pierre-Auguste Renoir (1841-1919), topped out at $27,500. The painting was accompanied by a certificate from the Art Collectors Group in Luxemburg. Also, Female Nude, a watercolor and pencil drawing attributed to Auguste Rodin (1840-1917), similar to other studies by the artist, signed, gaveled for $17,500.

A mixed media on paper attributed to Willem de Kooning (1904-1997), titled Woman, possibly a preliminary study for de Kooning’s Woman I, one in a series of artworks portraying abstracted nude women, breezed to $16,250. It came with a certificate of authenticity from the Bonnier Art Services in Toulouse, France. Woman I is on display at the Metropolitan Museum of Art (N.Y.).

A watercolor, chalk and charcoal on bond paper attributed to Edgar Degas (1834-1917), titled Dancer and signed by the artist, with the verso bearing the partial impression of a collector’s (or gallery) stamp, realized $15,000 One other work topped $10,000: it was James Abbott McNeill Whistler’s (1834-1903) oil on canvas portrait of a woman, untitled and an attribution ($10,625).

Woodshed Art Auctions is a family-owned art gallery specializing in oil painting restoration and live and online art auctions, celebrating its 50th anniversary. The firm is always accepting quality artworks for future auctions. To inquire about consigning a single piece or an entire collection, you may call Bruce Wood at 508-533-6277; or, e-mail him at bruce@woodshedartauctions.com.