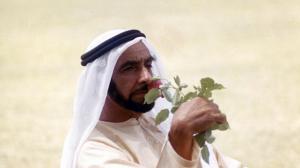 Sheikh Zayed, a Champion of the Earth 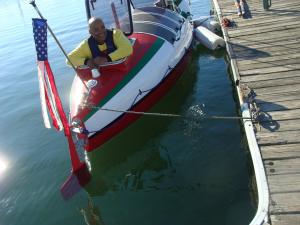 Don Victor Mooney with Never Give Up rowboat 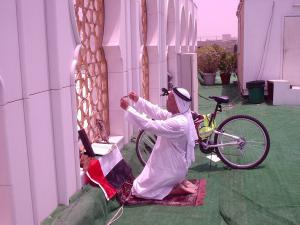 Bike tour to commemorate the Year of Zayed, with tree planting along the way in New York City and U.A.E.

Sheikh Zayed left us a strong legacy of determination, he was action-orientated”
— Don Victor Mooney

NEW YORK CITY, NEW YORK, UNITED STATES, May 1, 2018 /EINPresswire.com/ — Bike tour to commemorate the Year of Zayed, with tree planting along the way in New York City and U.A.E.

Marking the centennial anniversary of the founding father of the United Arab Emirates, His Highness Sheikh Zayed bin Sultan Al Nahyan, who died in 2004, His Highness, Sheikh Khalifa bin Zayed Al Nahyan, the current President has declared that 2018 will be known as the Year of Zayed.  Numerous activities are underway in the U.A.E. and globally to share the legacy of Sheikh Zayed.

In commemoration of the Year of Zayed, Don Victor Mooney, of Queens, New York will cycle thru New York City's Boroughs, which include the Bronx, Manhattan, Brooklyn, Queens and Staten Island. In each borough he plans to plant a tree in memory of Sheikh Zayed love of the earth. Intermittently, he'll make stops and share the legacy of Zayed.

In 2005, the United Nations Environment Programme honored Sheikh Zayed posthumously with the ‘Champion of the Earth’ award for his outstanding wildlife conservation, agriculture, forestation, and preserving biodiversity efforts both inside the U.A.E. and around the world.

Shortly afterwards, Don Victor Mooney will fly to U.A.E. where he'll embark on a second bike tour from Dubai to Abu Dhabi, with seven ghaf trees – the national tree of the U.A.E. in tow. He hopes to culminate his journey at Sheikh Zayed Grand Mosque, where he ended his first U.A.E. bike tour that took him thru all seven emirates in 2007.

The Zayed Mile project has launched a social media campaign to share it's admiration for Sheikh Zayed using the hashtag #thezayedmile.

For nearly two decades, Don Victor Mooney has continuously shared the legacy of Sheikh Zayed. He named his rowboat in honor of the founding father for a transatlantic row that was aborted early on in 2009; however, that set back didn't discourage him. He named his second boat – Never Give Up – painted in the national colors of the U.A.E. in 2011. He nearly lost his life as that boat took on water and he deployed a life raft that had him drifting for 14 days in the Atlantic Ocean until he was rescued.

Finally, Don Victor Mooney found victory when he completed his transatlantic row that took an arduous 21 months from the coast of Africa to New York's Brooklyn Bridge in 2015. Last year, he presented his rowing uniform and other items to the U.A.E. Consulate in New York marking the completion of that journey after a ceremony at Islamic Leadership School in the Bronx.

Sheikh Zayed left us a strong legacy of determination, he was action-orientated, added Don Victor Mooney.

Rower honors UAE founder with uniform & other items in NYC