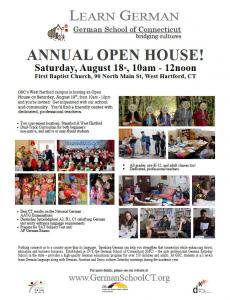 The GSC is a private, non-profit language school with most of the professional teachers native German speakers and celebrates it's 40th year in Connecticut!

We desire to have our children learn this language, not only to remember their roots but also to be more competitive on the international scene when their professional lives start.”
— Dr. Ludanyi, Principal and President

STAMFORD, CT, US, May 31, 2018 /EINPresswire.com/ — Every Year is an Achievement at The German School of Connecticut

Students from every slice of life enjoy spending their Saturday mornings learning to speak German and become immersed in Germany’s culture.
The German Language School of Connecticut is a private, non-profit language school with most of the professional teachers native German speakers. There are two semesters, and the tuition is nominal. Parent volunteers help to keep costs down.
Many of the students have a German heritage. They may come from bilingual or multilingual homes where German is spoken. Yet a good number of students attend who have no ties to the homeland and no prior knowledge of the language. They enroll for the joy of learning a new language.
This year The German Language School is celebrating forty years of successfully educating students who may chose to attend a German University, enter the German world of international business, art and politics or just feel comfortable enough with the language to read off a menu or converse with others where German is spoken.
********

History of the German Language School

The month is October. The year is 1978. Couples waltz around the dance floor at The Pinewood Lake Club House. They’re enjoying dancing to the music of a big band just as much as they’d loved listening to a string quartet before dinner while sipping champagne. This is The Viennese Benefit Ball –a festive fundraiser for the newly opened German Language School. The cost of each ticket: $12.50.
Another event takes place the following June. This one, “A Little Bit of Bavaria,” is a German beer dance and sing-along. For entertainment, Schuhplattler dancers perform traditional Bavarian dances. These tickets cost $6.00 each.
The Vision of a German School

German- American parents living in Stamford, CT shared their concerns about how their children will learn to speak and write German and absorb the rich culture of their homeland. They shared their thoughts of opening a German school that would meet on Saturday mornings during the school year, thus becoming what is known as “a Saturday school.”
They were not alone with their anxiety about the importance of languages in an international world. It was underscored in April 1978 when President Jimmy Carter established a Commission on Foreign Languages and International Studies.
Opening a German Saturday school was an ambitious goal. The parents understood the need for serious financial backing, professional teachers and strong and dedicated leadership to establish a workable structure and create a challenging curriculum.

One member of this group was Frau Dr. Renate Ludanyi, a college professor of German at Western Connecticut University in Danbury, CT. As an educator, she knew that the ability to learn a new language is highest when children are young. As if she needed further convincing, her daughter kept telling her, “I want to learn German with a “real teacher.” The year was 1977—forty years ago.

Members of the steering committee were Dr. Ludanyi, Mrs. Bronder, Mrs. Dautel, Mrs. Lust, Mrs. Sigrist, Mrs. Yeager and Mr. Klostemann. They established the guidelines: the school would provide professional instruction in the German language for children and adults, be in session for 30 Saturdays during the school year from mid-September to early June and have an enrollment of at least thirty students with a minimum of ten in each class. It would be affiliated with the German Language School Conference, Inc.
Before going further, this committee needed to know if there was enough interest. They sent a questionnaire to members of the Stamford community. The response was enthusiastic. “It’s an idea long overdue,” a German mother wrote. “Will you have classes for adults?” a Hungarian-German engineer asked.
The committee was further encouraged to learn the results from a recent study of 260 German companies in the United States. About half of those who responded replied that “they were hoping to hire German-speaking professionals in the near future.”

Dr. Ludanyi is quoted in the local newspaper as saying: “Because of a recent influx of German industries into Fairfield County, a new and urgent interest in the German language and culture has developed in this area.”

Building Is Found; Teachers are Hired

On May 22, 1978, a school with the name of The Independent German Language School of Southern Connecticut was incorporated. That summer was spent in finding a school willing to rent them space on Saturday mornings. It needed to be centrally located for the majority of families, accessible in all weather to the Merritt Parkway and CT Turnpike, have adequate parking and a pleasant atmosphere in which the children could work. A private K-8 school, Unquowa School, in Fairfield, CT was chosen.

College educated teachers who spoke fluent German needed to be hired. Most of the applicants were native-born Germans with advanced degrees.
Understandably, the organizers were most concerned about having a large enough enrollment. Not content to rely on solely word of mouth, they hung informational posters in libraries, supermarkets, and local businesses. They needn’t have worried.

Next Open House is in West Hartford:

Children of the German School of Connecticut signing a Christmas song on TV (Fox 61 in Hartford, CT)