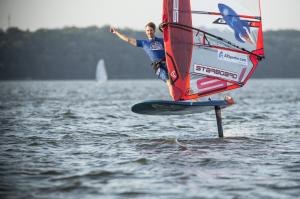 LONDON, ENGLAND, UNITED KINGDOM, August 23, 2018 /EINPresswire.com/ — The World and European windsurfing champion, Mr. Michal Polanowski, has set his sights high again, and this time he aspires to revolutionize the world of sports by creating the first peer-to-peer app for sports’ equipment renting and for instantaneous booking of sport-related professionals. What makes this app unique is that it aims to grow from a successful MVP on a European level to a global brand-name thanks to blockchain technology.

The AllSporter team is preparing a Token Generation Event (TGE) in which they plan to raise up to 19 million USD that would fuel their global expansion. As one of many successful startups that has decided to take on the path of blockchain instead of VC capital, AllSporter believes that by raising money directly from their sports’ community would ultimately give them the upper hand to the competition and long-term advantage of having a loyal user base, aligned in interests and perspectives with their management team.

Aside from using blockchain to acquire capital, the advanced AllSporter blockchain technology would create one of the most sophisticated, immutable IT systems. The AllSporter ecosystem aspires to create a frictionless and efficient payment system, that will bypass divisions based on national borders and fiat currencies. With the AllSporter blockchain solution, partially even now available on the social network for programmers, GitHub, sports’ enthusiast around the world would experience unrestrained ability to book their favorite personal trainer or lease relatively expensive golf equipment more efficiently and in any legal currency.

The Chief Executive Officer at AllSporter, Mr. Polanowski excitingly stated that “one of the problems in many sports, including windsurfing, was the accessibility and availability of equipment by sportsmen around the world”. He also shared his faith by stating that “with a peer-to-peer solution, the AllSporter App eliminates barriers to do sports and makes every physical activity a bit more available and fun”.

The fundraising for the AllSporter App global expansion is poised to start in September 2018 and would be conducted globally in most jurisdictions that allow crypto capital crowdfunding, aside from the USA, Singapore, China and South Korea.

AllSporter is the next innovative step for the sports enthusiasts and professionals who want to rent equipment or book their next sports experience. It is based on cutting-edge blockchain technology that offers immutable records and fast transaction speeds in any major currency. The AllSporter app is also supported by Green Capital S.A. – a company in majority ownership of Mr. Michal Polanowski.