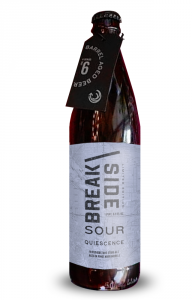 New series has featured everything from the peculiar to the beguiling over the past year, providing a showcase for brewing creativity

This program allows us to express some of the most challenging, exciting and inspiring styles in brewing today, and we have had a blast releasing these beers to more people over the past year.”
— Ben Edmunds, brewmaster, Breakside Brewery

PORTLAND, OR, USA, November 13, 2018 /EINPresswire.com/ — Breakside Brewery, known for its innovative, experimental and diverse beers, expanded its barrel-aged sour program to include 500ml bottles in 2018 and is rounding out the year with an impressively complex and diverse number of brews under its belt. The "Breakside Sour" Series, which introduced the brewery's wild beers to wider distribution for the first time, is closing 2018 with Quiescence.

Ben Edmunds, brewmaster for Breakside, said, "This program allows us to express some of the most challenging, exciting and inspiring styles in brewing today, and we have had a blast releasing these beers to more people over the past year. We’re looking forward to creating more beautiful beers in this series, which are challenging and sometimes several years in the making."

Quiescence is a blend of 13 casks of wood-aged sour beer aged for 12 months in Archery Summit Pinot Noir barrels. Its name, which means a state of inactivity or prelude, reflects the time suspended in the brewery’s barrel house, waiting for release. It features notes of sandalwood, light stonefruit and mild oak in a balanced, mixed-culture sour. ABV: 5.9% / IBU: 3

Some of the other beers released in the 2018 Breakside Sour series included:

– In the City of Flowers, a blended sour beer aged on Oregon-grown peaches and chamomile, and then conditioned on jasmine flowers

– Qualia, blended from 15 casks of mixed culture beers and aged on mangoes after blending

– #MoreFriends #MoreMemories, a blending of 18 casks from the cellar over a generous helping of raspberries

Breakside's brewers are planning even more exotic creations in this program for 2019, exploring different barrel options and ingredients.

The brewery has released a new video showcasing its barrel program, which can be found here:
https://www.dropbox.com/s/ywfzw8luozvmtvg/Barrels1030.mp4?dl=0

About Breakside Brewery
Breakside Brewery opened in 2010 in Northeast Portland as a restaurant and pub brewery. The brewery is known for its innovative, experimental and diverse beers. In 2013, Breakside expanded operations to Milwaukie, OR with a 30 bbl production brewery filled with 30, 60 and 120 barrel tanks, barrel rooms for wild and non-wild/sour fermentations, a high-speed bottling line and a 24-tap tasting room. In 2017 Breakside opened its third location in the Slabtown district of Northwest Portland. In addition to winning several national and regional awards for its beers, Breakside was named Brewery of the Year at the 2017 Oregon Beer Awards and the 2017 Best of Craft Beer Awards. Breakside sells on draft, 22oz bottles and 12oz Six Packs in Oregon, Washington, Hawaii, Arizona, Colorado, Idaho, North Carolina, South Carolina, Northern California, British Columbia, and Alberta. www.breakside.com