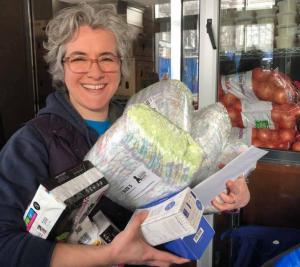 Greater DC Diaper Bank is among the NDBN member diaper banks that have distributed diapers to furloughed federal workers and families impacted by the recent government shutdown.

The diaper donation was made possible by a $100,000 grant to NDBN from GoFundMe and the thousands of individuals who contributed to the “Government Shutdown Direct Relief Fund.”

“Going without pay for a month left many furloughed federal workers and their families straining to afford basic necessities, like diapers,” said NDBN CEO Joanne Goldblum. “Fortunately, diaper bank programs stepped in to help, much like they do following a natural disaster.”

“However, the unexpected demand depleted the number of diapers available to address ongoing diaper need among families living in poverty. The GoFundMe grant allows NDBN to get three-quarters of a million diapers back into these communities so they can continue to be there for families when needed.”

One in three U.S. families experiences diaper need, which is the struggle to provide enough diapers to keep a baby or toddler clean, dry, and healthy. A lack of clean diapers impacts the physical, emotional, and economic well-being of children and families.

Other national nonprofits receiving grants from the GoFundMe campaign include World Central Kitchen, Feeding America, and Federal Employee Education and Assistance Fund (FEEA). To date, the fund has received more than $470,000 in donations.

The National Diaper Bank Network (NDBN) is a nationwide nonprofit dedicated to eliminating diaper need in America, by leading a national movement to help meet the basic needs of all babies and their families…including access to clean, dry diapers and other material goods. Founded in 2011 with the support of Huggies®, the network raises national awareness of diaper need (#DiaperNeed) and supports the development and expansion of diaper banks in communities throughout the country. Its active membership includes more than 200 diaper banks, diaper pantries, and food banks located in 47 U.S. states and the District of Columbia. More information on NDBN and diaper need is available at www.nationaldiaperbanknetwork.org, and on Twitter (@DiaperNetwork) and Facebook (facebook.com/NationalDiaperBankNetwork).