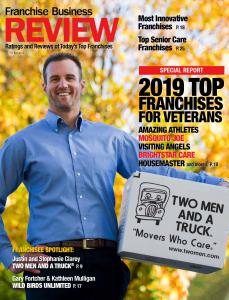 Guide to the Top Franchises for Veterans

The 80 companies named in this year’s report received the highest ratings from the veterans who own them on our independent satisfaction survey.”
— Eric Stites, founder and CEO, Franchise Business Review

To identify the companies on the list of Top Franchises for Veterans, Franchise Business Review analyzed 18 months of data from over 25,000 franchise owners, of which just over 10% were veterans, representing over 250 brands. Franchisees were surveyed on their overall satisfaction with their brands and their likelihood to recommend them to others.

Franchisees were asked 33 benchmark questions about their experience and satisfaction regarding critical areas of their franchise systems, including training & support, operations, franchisor/franchisee relations, and financial opportunity.

“The reality is that very few of the thousands of franchise opportunities available today are rated highly by their franchise owners,” said Eric Stites, founder and CEO of Franchise Business Review. “That’s the whole reason we do what we do, and that is to help prospective franchisees understand which franchises are the best opportunities, based on the actual performance and satisfaction of franchise owners. The 80 companies named in this year’s report received the highest ratings from the veterans who own them on our independent satisfaction survey.”

Visit www.FranchiseBusinessReview.com to see the full description of the 2019 Top Franchises for Veterans.