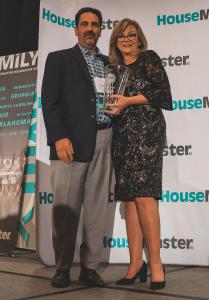 TOWACO, NEW JERSEY, USA, January 17, 2020 /EINPresswire.com/ — HouseMaster Home Inspections owner Sergio Angione of Towaco, NJ, was recently recognized for his commitment to carrying on the legacy of the late Ken Austin, the founder of HouseMaster and a trailblazer in the home inspection industry. Angione received the prestigious Austin Cup award at HouseMaster’s November 2019 franchise conference in Boulder, Colorado.

“This award really means a lot to all of us who have been a part of the HouseMaster family,” said Angione. “Ken was the visionary behind HouseMaster — his dedication and vision provided all of us a path to providing home inspections in our communities and realizing our entrepreneurial dreams. We’re grateful that his legacy continues on through his daughter, our President and CEO Kathleen Kuhn. The Austin Cup is a sign of what it means to be a dedicated HouseMaster owner and I’m grateful to receive it this year.”

Kuhn and the HouseMaster corporate team hosted the conference and event, honoring the success of franchise owners over the past year and celebrating their lasting impact on the home inspection industry. Many of the HouseMaster owners that serve over 325 locations across the United States and Canada gathered in Colorado for the annual gathering.

This was a very special conference for the HouseMaster family as the brand celebrated its 40th anniversary of franchising this year. HouseMaster is known for its strong commitment to customer service. HouseMaster holds a Net Promoter Score of 92 (a customer satisfaction ranking higher than Apple and Ritz-Carlton). Franchise Business Review has named HouseMaster a top franchise brand since 2009.

“It means so much to know my father’s legacy continues in each and every one of our franchise owners,” Kuhn said. “We present our Austin Cup to a franchise owner who understands the essence of who we are and what we’re looking to accomplish. All of our owners are highly knowledgeable home inspectors who value our customers and aim to create businesses with significance. Sergio is so deserving of this award and it is wonderful to be able to share it with him.”

In 1971, Ken Austin discovered a great entrepreneurial opportunity as he was scanning the pages of The Wall Street Journal. He saw an ad for a company attempting to launch a home inspection franchise system nationwide. While few at the time even knew what a home inspection was, he saw the potential in the concept. He bought in as a minority stockholder and immediately began learning and growing the business. Several years later, investors bought into the company and purchased his shares. Austin then launched AMC Property Evaluations, Inc. in Central New Jersey and grew the business to a large multi-inspector firm serving the tri-state area.

HouseMaster quickly grew to be one of the most respected names in the industry and the nation’s largest home inspection company. Under Austin’s leadership, HouseMaster helped make home inspections an integral step in the home purchasing process.

To connect with Sergio directly, call 973-299-1808 or email srainspections@housemaster.com.