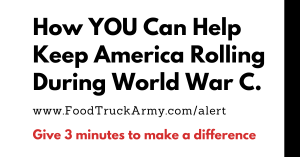 How You Can Help Keep America Rolling During World War C

We’re asking for the public’s help in pushing this through ASAP with an Action Alert at www.FoodTruckArmy.com/alert”
— Eric Normand

With each state lockdown, truckers have more difficulty in finding hot meals even though they are driving more hours per day and delivery times can actually mean life or death – ventilators for example.

Trucker chat rooms are filled with concerns about truck stops closing after lunch or not open at all in some areas. If they try to walk through a fast food car line, they are refused service for safety reasons.

“It’s really sad hearing the stories truckers are facing – finding food, being denied restroom access, being forced to deliver when sick, nowhere to leave the truck and no one to take them if they have to visit the ER or get quarantined, ” said Eric Normand of FoodTruckArmy.com

“These guys are right up there with our medical professionals as being critical to the world’s battle that we’re calling World War C (WWC). Finding hot meals to keep their immune systems strong shouldn’t be one of their concerns. Rest areas would be a perfect place to feed truckers.”

For decades, there have been discussions about commercializing rest areas within the Federal Highway System with things like restaurants & souvenirs. The states spend millions every year on maintaining these facilities & grounds with basically no income to offset the free services to travelers.

With funds stretched thin as costs rise, allowing profitable options for motorists could help states free up funds for use elsewhere. However, there is severe corporate blowback over fears this could devastate truck stops as motorists often prefer the easy access of rest areas.

So, rest areas have been off limits for food trucks until now.

Friday, the Federal Highway Administration released a Notice of Enforcement Discretion that states, “FHWA recognizes that in those States food trucks may provide vital sustenance for interstate commercial truck drivers and others who are critical to the Nation's continued ability to deliver needed food and relief supplies to the communities impacted by the economic disruptions and healthcare strains caused by COVID-19.”

The FHWA has lifted all restrictions on food trucks operating in Federal highway rest areas and will refrain from remedial actions against the states as long as America is under this national emergency.

“This is a huge step that opened the door; however each state must also agree to allow food trucks before truck drivers can benefit from this action. A few states have already agreed, but most aren’t even aware.

“We’re asking for the public’s help in pushing this through ASAP,” said Normand. “We’ve released a two-step WWC Action Alert with an easy email template that takes 3 minutes to get this message to each state’s DOT. The Action Alert and FHWA notice can be found at www.FoodTruckArmy.com/alert .

“We’re also calling all food trucks to get involved and fill the gaps. They can join on our home page. There’s no charge; we’re just happy to bring the cavalry!”