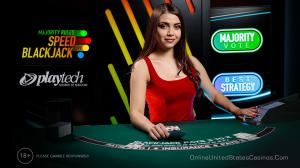 The leading supplier of gambling services and software, Playtech, has announced the roll-out of a new Blackjack game titled Majority Rules Speed Blackjack.

This is a major milestone for the company”
— Mor Weizer, CEO of Playtech

RICHMOND, VIRGINIA, UNITED STATES, July 1, 2020 /EINPresswire.com/ — The leading supplier of gambling services and software, Playtech, has announced the roll-out of a new Blackjack game titled Majority Rules Speed Blackjack, in collaboration with gaming group GVC Holdings. This new Blackjack variant is exclusive to Playtech casinos and GVC and will be available at the start of July.

The B2B Live Casino services section of the iGaming industry has been dominated for years by Latvia-based Evolution Gaming. A company that provides live table games to online platforms via state-of-the-art broadcast studios from countries around the world. In recent years, Playtech has decided to focus on this part of the market and provide new and exciting products that will appeal to table game players.

Majority Rules Speed Blackjack is one such offering that adds a twist to Blackjack gameplay, introducing a unique level of player involvement. Interested parties can look for it on great gaming sites such as casino.com or bet365 casino and on other platforms that carry Playtech games. It is a fresh and exciting variant that comes with two game modes, depending on how many players there are at the table. These modes are Majority Rules and Best Strategy.
In Majority Rules, the main idea is that players vote on how to play a given hand. All players poll on Stand, Hit, Double or Split actions, with a vote of 50% or higher activating an action. If the game has fewer players, the Best Strategy mode becomes active. Here, hands are automatically set according to the best mathematical option available.

Playtech’s Live Casino CEO, Edo Haitin states that: “Innovation and gameplay are at the core of our company’s strategy. Majority Rules delivers on both counts.” He further expands that modern players demand a certain level of interactivity, and they want to experience the joys of playing alongside others. “We believe that the combination of engaging Blackjack gameplay and the new community atmosphere will be a big hit with players,” he said.
Head of Live Casino at GVC, Matt Charlesworth added that: “Majority Rules Speed Blackjack captures a real community feeling. The game is scalable. It provides something different, without straying from classic Blackjack with popular side-bets options.”

Playtech has proven that it is making a serious push in expanding into the live dealer arena as well as their global growth. In June, they announced they had received official approval from the NJDGE to launch their products in the Garden State with Hard Rock Atlantic and Bet365.

According to Mor Weizer, CEO of Playtech: “This is a major milestone for the company.” He added that further US expansion is in the cards and that Playtech will look for licensing in more states as the US market is a strategic location essential for company growth.

Playtech is a technology company that delivers gaming services, software, and content to platforms in the iGaming sector. It is a pioneer in the sphere that can be found on the Main Market of the London Stock Exchange. It currently has over 5,900 employees in 19 countries around the world, with headquarters located in the Isle of Man.

The goal of the company is to partner with and invest in top brands in regulated markets to provide its gambling technology across the online value and retail chains. It supplies its products on a B2B basis to leading industry retailers and online operators, as well as land-based gaming establishments. Since June of 2018, Playtech has branched off into sports betting, with the acquisition of Snaitech, one of the leading concessionaries in Italy in the betting sector.
TradeTech Group is Playtech's Financials Division and it’s a leader in the CFD and financial trading industry.