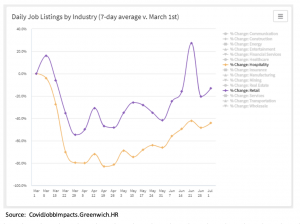 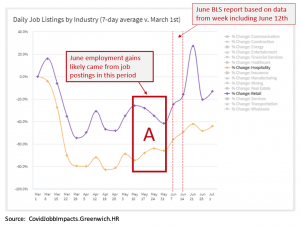 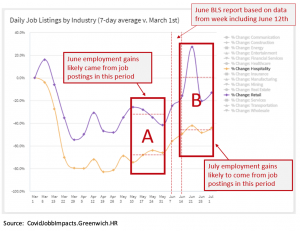 Hiring Is Still Increasing, Especially In The Retail and Hospitality Sectors

New job advertisements, especially in retail and hospitality, were notably higher in late June compared to late May, indicating even more job gains will be reported for July.”
— Cary Sparrow

MINNEAPOLIS, MN, USA, July 7, 2020 /EINPresswire.com/ — The June employment report from the Bureau of Labor of Statistics showed an increase of 4.8 million jobs. It was welcomed as good news, but asterisks were quickly added based on the recently surging Covid infection numbers. Many fear that July will show softening in the labor market.

But even as states are tightening restrictions and issuing warnings about the surge in COVID-19 cases, daily job listing data, especially in the retail and hospitality sectors, indicate the July jobs report will be better than June, likely exceeding 6 million new jobs. This is according to labor market intelligence firm Greenwich.HR and business intelligence firm One Model, Inc.

Using publicly available daily job listing data, demand for new Hospitality and Retail jobs is trending to show an increase of over 4 million new jobs in July. Most other industries are also showing increased hiring activity, on track to generate another 2 million jobs.

August jobs numbers are a bit more difficult to estimate at this point. As states pause and reverse their opening plans, market uncertainties will likely drive job listings downward. However, hiring will be more influenced by week-to-week changes in consumer behaviors, since hiring for hourly and other customer- and product-facing roles will be driven by near-term conditions rather than longer-term uncertainties.

JOB LISTINGS AS A LEADING INDICATOR
A company’s decision to advertise a job opening is a clear indicator of its business outlook, and an indicator of the need to meet staffing requirements through new hires rather than re-hiring laid-off employees, using temporary employees, etc. This is true whether a company is hiring to meet growing demand or to backfill current positions vacated by resignations or illness. The aggregate of these hiring decisions is a leading indicator for the economy overall.

TRENDS IN HOSPITALITY AND RETAIL INDUSTRIES
New job listings in Hospitality hit a low in mid-April at around -80% versus March 1st , and have been on a steady path upward since. This is big progress, albeit far below pre-pandemic levels and still around -45% off versus March 1st. (Figure 1.)
In Retail, the drop was also significant in March, regaining some ground in April and May, then demonstrating strength in June. It is the only industry that, even if for just a moment, has crossed into the positive terrain, exceeding the new job postings figures from March 1st on June 21.

In the June BLS report, Hospitality and Retail combined to create 2.84 million of the 4.8 million increase in employment. This is roughly 60% of the added jobs coming from two industry sectors that comprise about 20% of the workforce.
From the June BLS report:

“In June, employment in leisure and hospitality increase by 2.1 million, accounting for about two-fifths of the gain in total nonfarm employment. Over the month, employment in food services and driving places rose by 1.5 million, following a gain of the same magnitude in May. Despite these gains, employment by food services and drinking places is down by 3.1 million since February. Employment also rose in June in amusements, gambling, and recreation (+353,000) and in the accommodation industry (+239,000).

ESTIMATING THE JULY HIRING FIGURES FOR HOSPITALITY AND RETAIL
In spite of rising concerns about the surge in COVID-19 cases, the trend data for new job listings for Hospitality and Retail predicts further increases in employment in the month of July, at least during the period which will be measured for the next BLS report (generally the week including the 12th of the month) (Figure 2).

Looking at a similar time window of job listing activity that will correspond to the employment levels on July 12th indicates:
1) the job listings that will be related to new jobs in that week have, for the most part, already been created, and many of them filled; and
2) the volume of job listings in the time period that will be reflected in the July report are considerably higher than the levels that drove the very large job numbers in the June report.

Job listing data indicate 4 million new jobs from Hospitality and Retail will be reported in the July BLS report. This is based on the analysis of the job listing volumes in these two industries, focusing on Box A (June report) versus Box B (July report). (Figure 3.)

LOOKING AHEAD TO AUGUST
As state policies regarding Covid-19 are adjusted over the coming weeks, business’ hiring plans will be adapting to local market conditions. The pace of disruption due to the pandemic continues to outpace the ability of traditional sources of economic data to convey actual conditions and provide meaningful outlooks. The pace of the hiring recovery will be dictated by consumer demand, and daily job postings will provide a leading indicator of how businesses are responding to consumer behaviors.