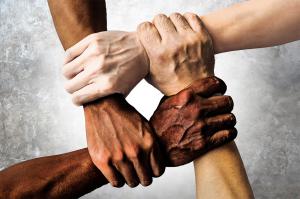 Variations in human skin color are adaptive traits that correlate closely with geography and the sun’s ultraviolet radiation. 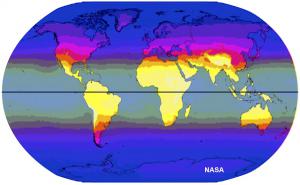 Skin color, eye color, and hair texture are the primary ways human bodies adapt to intense sunlight in the tropics

We live in a very delicate Goldilocks balance of how much solar ultraviolet-B radiation reaches Earth’s surface and how much is absorbed by the cells making up our skin.”
— Dr. Peter L. Ward, U.S. Geological Survey retired

JACKSON, WYOMING, UNITED STATES, August 7, 2020 /EINPresswire.com/ — Humans thrive on Earth only when they absorb just the right intensity of just the right types of solar radiation. Low-frequency, infrared sunlight keeps us warm. Moderate-frequency visible sunlight allows us to see and powers photosynthesis, causing plants to grow. But too much high-frequency ultraviolet sunlight and neither animals nor plants flourish. Life on Earth exists only because of a very delicate Goldilocks balance in the frequencies and intensities of solar radiation reaching Earth’s surface.

Earth’s atmosphere filters sunlight. The highest energy components of sunlight, including gamma rays, X-rays, and extreme ultraviolet radiation, are completely absorbed in the uppermost atmosphere where they cause ionization of nitrogen and oxygen—forming and heating the ionosphere, 620 to 62 miles above Earth.

Ultraviolet-C solar radiation is completely absorbed primarily by molecules of oxygen, forming and heating the mesosphere and stratosphere 62 to 6 miles above Earth.

“The crux of this delicate Goldilocks balance,” according to Dr. Peter L. Ward, a geophysicist for 27 years with the U.S. Geological Survey, “is how much solar ultraviolet-B radiation reaches Earth’s surface and how much is absorbed by the cells making up the skin of animals and the surface layer of plants.”

The intensity and duration of sunlight is greatest in the tropics, decreasing toward the poles. The primary way our bodies adapt to these changes is by adjusting skin color, eye color, and hair texture.

Our ancestors evolved from apes in the jungles of eastern Africa 6 to 7 million years ago. Around 1.2 million years ago, as the world descended deeper into the last ice age, a megadrought drove early humans into open savannah grasslands. They began to walk upright in open sunlight. They lost their body hair, evolved more efficient perspiration, and evolved short, curly, Afro-textured hair to protect their brain from the heat of direct sunshine.

But the primary evolutionary adaptation to bright sunlight is skin color produced by melanin. Melanin is a dark brown to black pigment that occurs naturally in the hair, skin, and the iris of the eyes in people and animals. Melanin is generated by exposure to ultraviolet radiation causing tanning of skin. Melanin absorbs up to 99.9% of ultraviolet-B radiation before it can penetrate deeper into the body, where is can damage tissue and DNA. Too much ultraviolet-B radiation causes depletion of folate that is required for the body to make DNA and RNA and to metabolize amino acids.

Thus, humans living in intense sunlight in equatorial regions, long before clothes were invented, developed dark skin, short, curly, dark Afro-textured hair, and brown eyes. Beginning 70,000 to 50,000 years ago, some Homo sapiens, members of our species, began migrating out of the tropics into mid-latitudes where sunlight was less intense. At higher latitudes, they evolved lower levels of melanin, leading to lighter skin, lighter eye color, and lighter hair color so that they could absorb adequate sunlight. Plus, they evolved straighter hair that blankets the head, providing increased warmth. These lower levels of melanin appear to have evolved in a heritable way in as little as 100 generations—approximately 2500 years.

There is a very high correlation between skin color and the latitude at which a population lived for thousands of years. The less intense the sunlight, the lighter the indigenous people’s skin. That is why fair skin, blonde hair, and blue eyes are so prevalent in Scandinavia.

As humans moved to higher latitudes, they developed clothing which meant less skin was exposed to sunlight, hastening decreases in melanin. They also developed diets rich in vitamin D, such as seafood, fatty meats, egg yolks, mushrooms, and, more recently, fortified foods such as milk, orange juice, and cereals.

Light-skinned people can produce vitamin D in their skin at rates 5 to 10 times faster than dark-skinned people. With the rapid dispersal and mixing of populations worldwide in recent centuries, up to 50% of world population today may not get enough sun and 40% of U.S. residents are deficient in vitamin D. How much sunshine is needed for a healthy body is a function of skin color—the darker the skin, the more sunshine is required.

The intensity of sunlight in the tropics has also influenced social customs. For example, the modern siesta, a nap after a midday meal, is a common way for those working outside to avoid the most intense sunshine in the early afternoon.

Thus, the existence and health of humans and plants living on Earth is determined by having just the right Goldilocks balance between how much solar ultraviolet-B radiation is absorbed by the ozone layer versus how much reaches Earth’s surface. Human bodies adapt over thousands of years to solar intensity at the latitude where their ancestors lived. Dark skin, brown eyes, and Afro-textured hair made it possible for early humans to thrive in the bright sunlight of tropical East Africa. Lighter skin, lighter eyes, and straighter, more insulating hair made it possible for humans to survive at higher latitudes as they roamed the world in search of food.