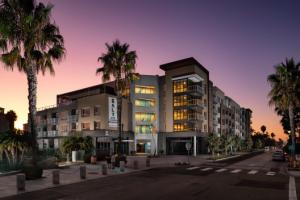 It was so great to be a part of this project and help revitalize the downtown beach community”
— Ian Mahon, President and CEO of Level 3 Construction

VISTA, CALIFORNIA, USA, September 22, 2020 /EINPresswire.com/ — Level 3 Construction, a leader in hospitality renovation and construction, proudly announces the completion of “SALT,” another state-of-the-art project: A five-story mixed use development with 52 residential units including 8,508 sqf. of ground floor retail space developed by Pelican Communities in the heart of Oceanside.

Construction has completed on SALT, one of the several ground-up development projects in progress that are reshaping the skyline of Oceanside. This 52-unit mixed use, mid-rise development will bring new ground floor retail space to the heart of downtown Oceanside with four additional stories of residential living space. Level 3 Construction was awarded the second half of this two-phased project which kicked off in early 2018.

The project began as a public/private partnership with Pelican Communities and the City of Oceanside to build 335 public parking spaces and a mixed-use project on a surface parking lot in the downtown. The parking structure (Phase I) was completed in December of 2017 under a separate public contract with a specialized contactor. Level 3 Construction involvement in the project began with early preliminary budgeting and preconstruction services for the retail and residential component of the development (Phase II). The second phase officially kicked off in January of 2018.

Level 3 Construction’s early dedication to their client and the project helped cement their role in the project and establish the relationship with the developer and Construction Management firm. Level 3’s extensive hospitality experience also played a key role in the final design specifications and finish package of the residential units. Their ability to self-perform a number of different trades with their small army of multiskilled tradesmen was also leveraged to provide competitive pricing and an aggressive schedule.

“It was so great to be a part of this project and help revitalize the downtown beach community,” said Level 3’s President and CEO, Ian Mahon.

The completed project will activate the entire block and enhance the community with the exciting new retail tenants that have begun to occupy the space along with the convenient parking just blocks from the Oceanside Pier. New residents at SALT will join the fast growing Oceanside population contributed by multiple multifamily projects in progress or completed last year.

About Us:
Founded in 2006 by President and CEO Ian Mahon, Level 3 Construction, located in Vista, California, is known for being a leader in hospitality renovation and construction with a growing presence in multifamily, restaurants, office and tenant improvements. Our project experience ranges from small interior renovations and tenant improvements to multi-million dollar ground up construction and renovations. Level 3 collaborates with developers, owners, architects and property owners to implement the most efficient and cost-effective solutions that will reinvigorate a property. Level 3 Construction continues to grow its portfolio of work through quality performance and on-time completion of projects. To learn more about Level 3 Construction’s services, contact Ian Mahon at 760-448-5456 or at imahon@level3construction.com.