Thousand Acres is the fiction imprint of Armin Lear Press. 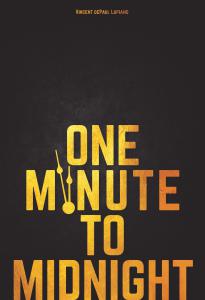 One Minute to Midnight front cover designed by C.S. Fritz

BOULDER, CO, UNITED STATES, December 1, 2020 /EINPresswire.com/ — Armin Lear Press is announcing the December 8, 2020 launch of its new imprint, Thousand Acres, with the publication of One Minute to Midnight by Vincent dePaul Lupiano.

Rayne Foster is on a covert mission to surveil the estate of Florida mafia boss, Donato “Cheese” Chesario. Photographing from a tree in a violent thunderstorm, she spots a camo-clad intruder sneaking into the mobster’s estate using a grappling hook. His intent: steal a box stamped with a Nazi swastika containing an enigmatic object Chesario brought back from Germany after WWII. Fatal complications slam Rayne with blistering surprise when a rogue FBI agent and his nefarious cohort known as the “Magician,” kill their way into the estate to also steal the box. But the object of everyone’s intent has disappeared—an item that, in the wrong hands, will have severe international consequences. Rayne senses her CIA field director has duped her. And as he intended, Rayne is now the bait. And she has no idea what is inside the box.

Lupiano is the author of two novels under the pseudonym Christopher Sloan, In Search of Eagles, and The Wings of Death. Writing under his own name, he has written three nonfiction books, the latest of which is Operation Tidal Wave: The Bloodiest Air Battle in the History of War (Lyons Press, December 2020). He spent years as program director, writer, and host of his radio program at WFAS in White Plain, NY. In New York City, he worked at WOR-TV and WOR-AM as a promotional writer and producer. At WABC and WPLJ, he was a writer, producer, and editorial director. He also worked at IBM for ten years as a speechwriter to senior executives, editor of a management publication, producer, and director of corporate films and videos. He was born and raised in Manhattan, New York City, and currently resides in Franklin Lakes, NJ.

About Armin Lear
Armin Lear was founded in 2019 with the purpose of publishing books connecting people with ideas that make our lives richer, more fulfilling, and happier. Its founders have 25 years of publishing experience. The company headquarters is near Boulder, Colorado with a production office in Arlington, Virginia. Armin Lear is a member of the Independent Book Publishers Association and distributes its books worldwide in English through Ingram.