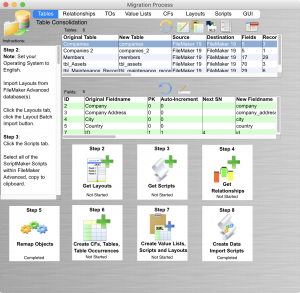 Faced with rebuilding 40 tables, 306 TOs, 159 layouts and 463 scripts. FmPro Migrator to the rescue and a few hours later we have a new, not corrupt, file saving us at least a weeks work.”
— Gordon Cox of Enrich Computer Systems

FREMONT, CA, UNITED STATES, January 14, 2021 /EINPresswire.com/ — .com Solutions Inc. announces a successful FileMaker database rebuild project with Gordon Cox of Enrich Computer Systems using FmPro Migrator. According to Gordon, this database file was causing numerous issues for the customer, including intermittent pauses and lockouts and was verified as requiring recovery by FileMaker's recovery option. The only solution was rebuilding the file: for a system that has had hundreds of hours of development this was a particularly daunting task.

The automated table consolidation feature within FmPro Migrator was used to import the metadata from the corrupted FileMaker database file and rebuild dozens of tables, hundreds of TOs, scripts and over 100 layouts.

Quote from Gordon Cox, Enrich:
"With a corruption in the main file we were faced with rebuilding 40 tables, 306 TOs, 159 layouts and 463 scripts. FmProMigrator to the rescue and a few hours later we have a new, not corrupt, file saving us at least a weeks work. FmPro Migrator has saved the day."

On macOS, FmPro Migrator uses AppleScript GUI automation to automate the processing of hundreds or even thousands of FileMaker objects per hour. Using macOS is the preferred platform to use for database rebuild and Table Consolidation projects. FmPro Migrator is fully functional on macOS Big Sur running on Apple Silicon hardware.

The use of AppleScript GUI automation within FmPro Migrator improves the reliability and performance of the automation tasks,reduces cost and setup requirements.

Pricing and Availability:
FmPro Migrator (including Developer Edition and Platinum Edition features) is priced at ($99) per developer, and is available immediately.