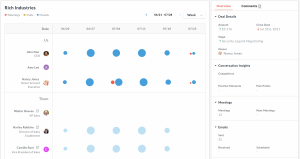 Every touch point with customers and prospects impacts revenue. To run your revenue operations seamlessly, you need to know what is happening across every deal and the overall health of your pipeline.”
— Aditya Kothadiya, Co-founder & CEO, Avoma

PALO ALTO, CALIFORNIA, UNITED STATES, August 5, 2021 /EINPresswire.com/ — Avoma today announced the launch of the Deal Intelligence to all its users as part of its mission to help improve transparency and cross-functional collaboration within organizations. With the introduction of Deal Intelligence, revenue teams can now better manage their deal pipeline by tracking deal progression, understanding the deals that are potentially at risk, and more.

The Deal Intelligence capabilities include:
• An overview of customer engagement across deals such as calls, meetings, and emails
• Understanding of the overall deal health, i.e. which of your deals are progressing (marked with ↑ arrow) and the ones at the risk of stalling (marked with ↓ arrow)
• Detailed and drilled-down insights into conversations, activities, deal stage progression, and more for each deal in your pipeline

“It’s important for revenue teams to have a quick overview on critical factors such as—how well a prospect is engaged, if the key decision makers are involved in the deal, the potential deal value, and when it is likely to close. But there are several touch points for every deal that pan across multiple channels such as emails, conferencing tools, calls, and CRMs making tracking account engagement and deal progression really difficult. With Avoma’s Deal Intelligence, you can now have all the activity and engagement data across all deals in one place,” Aditya added.

About Avoma
Based in Palo Alto, CA, Avoma was founded in 2017. Avoma's vision is to provide the most comprehensive AI assistant for meeting’s end-to-end lifecycle so you can automate low-value repetitive tasks like taking notes and augment high-value tasks like having effective conversations.