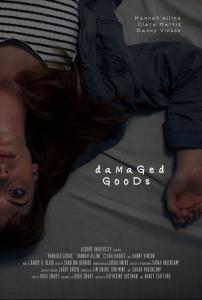 WILMORE, KY, USA, September 15, 2021 /EINPresswire.com/ — The award-winning Asbury University Media Communication department will host a red-carpet event premiering its film Damaged Goods on Friday, Oct. 1, at 7:30 p.m. at the historic Lyric Theatre in Lexington, Ky. The female-led movie is co-directed by Hollywood veteran Nancy Stafford (Matlock, Magnum P.I., Who’s the Boss?) and Asbury alumna Katie Oostman’15, and written by Doug Smart. It explores the difficult and culturally relevant topics of abuse, alcoholism, and family and relationship dysfunction, with Amanda, played by Hannah Alline, ultimately discovering that she can follow a new path of restoration.

“Producing Damaged Goods was a project that included over 50 dedicated staff and crew members — primarily made up of students, staff and alumni,” said Dr. Jim Owens, dean of the Asbury School of Communication Arts and professor of Media Communication. “Our goal was to create a film that was real as well as providing hope for the future. I am very proud of their work! Damaged Goods is a film that we believe will resonate with our audience. It is honest and straight-forward while projecting hope in difficult times.”

Damaged Goods draws from the pain that Amanda harbors from a young age. She also has an ex-boyfriend who is taking her money, a boss threatening to fire her, and a landlord who won’t fix her apartment. She keeps it under control until her estranged father comes back into her life, needing her help. The decisions that she must make bring her face to face with who she is.

Stafford said she was attracted to the project’s powerful, relevant story.

“It’s tough subject matter, but I’m especially excited that Damaged Goods is for audiences of every stage of faith,” she said. “It can be a bridge to people’s faith journey — to give an audience first steps — beginnings of restoration, forgiveness, healing and hope. And I believe it does that in an authentic and ultimately redemptive way.”

Stafford has been involved with other Asbury projects prior to the film, including TV projects.

“I love Asbury’s Media Comm Department,” she noted. “I was thrilled to be invited to co-direct Damaged Goods with talented Asbury alum Katie Oostman. Working alongside the students on set was exciting and impressive. Their work ethic, talent, and film training was evident. I’m so proud of these students and the film we’ve created! And it speaks volumes that the film has already been picked up for worldwide distribution by BMG Media. Such a great honor for these students!”

The film was recently selected to be screened at the Knoxville Film Festival and the New York City New Filmmakers Festival. The film is not yet rated and will be distributed by BMG Global. Asbury University has approximately 25 students who were involved with the project.

For tickets to the October premiere, visit lexingtonlyric.com