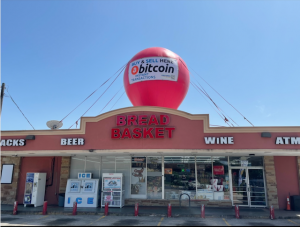 PreferredCoin, an Austin based Bitcoin ATM company, installed giant inflatables at a few of their locations this month to advertise bitcoin in a new way.

AUSTIN, TEXAS, USA, September 15, 2021 /EINPresswire.com/ — PreferredCoin, an Austin based Bitcoin ATM company, is taking its advertising efforts to a whole new level. Company team members installed giant, 25-foot tall inflatables at two of their new locations this month, which is believed to be a first in Bitcoin history. The inflatables sit on the roof at each location, grabbing attention from thousands of people in the Austin area to their Bitcoin ATM's.

"We love Austin, and we are all about giving everyone in the city an easy opportunity to buy Bitcoin." said Craig Hartman, Chief Marketing Officer of PreferredCoin. "Giant inflatables are unique, fun, and you really can't miss them driving by. We believe this is the first time Bitcoin has been advertised on one of them."

PreferredCoin has 8 Bitcoin ATM's around the Austin area. Each ATM is strategically placed so that residents from all over town have easy access to them. The company prides itself on being user-friendly with low fees, instant transactions, 24/7 live customer support, and even a rewards program. The machines are super simple to use and offer a friendly, sleek look that welcomes customers to try them.

"We're always happy to serve any customer, whether they're brand new to Bitcoin, or have been in it for years," said Hartman. "Our customer support team will stay on the line until the transaction is complete, and can answer any questions about Bitcoin or blockchain technology itself."

The company has plans to expand to the midwest, but for right now their focus is solely on the Austin area. Austin is home to a lot of Bitcoin ATM's, but unfortunately, a lot of them are out of service and don't have the customer's best interest in mind. Some of the ATM's are stacked with high fees, unavailable customer support, and poor security on transactions. PreferredCoin bases its business around customer's needs, and establishes the mindset of, "we win when you win".

PreferredCoin is one the largest operators in the Austin Bitcoin ATM market, and they don't plan on slowing down anytime soon. The company looks to have 50 Bitcoin ATM's installed in Austin and the Midwest by the end of 2021, utilizing every resource they can to bring bitcoin to as many people as possible.