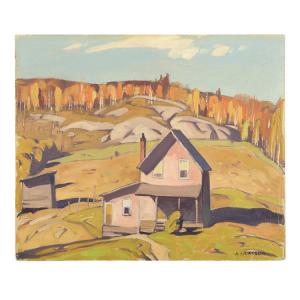 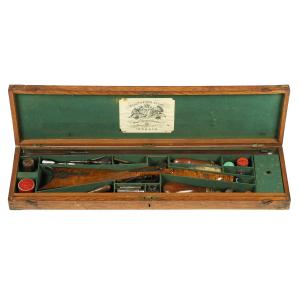 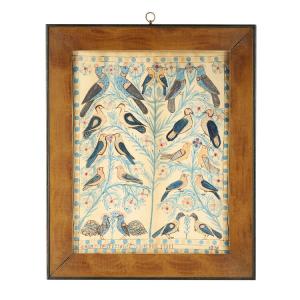 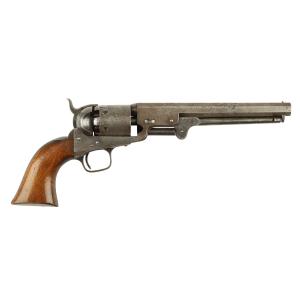 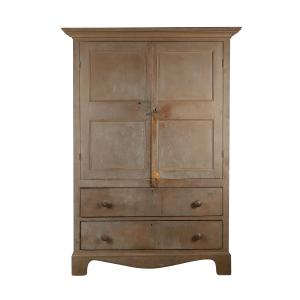 Painted pine linen press, made circa 1940 and found north of Oakville in Halton County (Ontario), the case of one-piece construction with two doors (estimate: CA$5,000-$7,000).

There are two headliners: the Don and Joyce Blyth firearms collection, and the decoy and fishing collections of Marty Osler. The auction will start at 9 am EDT.

Don Blyth found the treasure map to his firearms collection shortly after World War II. It was in the form of a firearms registry mandated during the war. He used it to track down his rarest guns.”
— Ethan Miller

The online-only auction has a start time of 9 am Eastern time, with Internet bidding available on the Miller & Miller website (www.MillerandMillerAuctions.com), plus LiveAuctioneers.com.

There will be two headliners: the Don and Joyce Blyth firearms collection, and the decoy and fishing collections of Marty Osler. Marty’s fishing collection includes a select offering of fine reels and rods, many by Hardy Brothers of England. The decoy collection is primarily Canadian and includes many fine examples by Carl O. Rankin, Frank Dolsen, Billy Ellis and Ken Anger.

The Blyth collection features Ontario firearms, including many unique examples, as well as highly collectible firearms by Colt, Remington, Stevens and others. Also included is artwork by the abovenamed Canadian artists and others. The sale is complemented by a select offering of wonderful Canadian and American furniture and fine and decorative art.

“Don and Joyce Blyth began their collection in the 1950s, before antiquing was a thing,” said Ethan Miller of Miller & Miller Auctions, Ltd. “Don found the treasure map to his firearms collection shortly after the Second World War. It was in the form of a firearms registry mandated during the war. He used it to track down his rarest guns, and it set the stage for Gooding’s book.”

Miller added, “Whether it was art by the Group of Seven, a passenger pigeon, or a Colt Dragoon, Don collected it. Now, others will have a chance to own what he and his wife Joyce cherished for their entire lives.” There will be no in-person auction to attend, but bidders can tune in to the live webcast on the Miller & Miller Auctions website, on October 9th, to watch lots close in real time.

The 1940 oil on board landscape painting by the Group of Seven artist Alfred Joseph Casson is a candidate for top lot of the auction, with a strong estimate of $30,000-$40,000 (all prices quoted are in Canadian dollars). The work, titled Outside Algonquin Park, depicts a bucolic scene near the village of Whitney. Casson focused much of his work on rural villages and towns in Canada.

The oil on board country scape painting by Group of Seven founding member Alexander Young Jackson, done in 1966, is similar in style to the Casson work, except there are no buildings in the Jackson painting, as there are in Casson’s. The piece, with an estimate of $20,000-$30,000, is signed lower left, titled and dated, “Oat Field Harrington, Quebec, Sept. 1966, A.Y. Jackson.”

A large (18 inches by 14 inches) watercolor and ink folk art fraktur-type painting by Anna Weber is signed in fraktur writing and dated 1870. The design, executed in blues, red, yellow and brown, consists of eleven pairs of birds, each pair a different type (estimate: $12,000-$18,000). Weber was born in Lancaster, Pennsylvania but died in Waterloo County, Ontario, a Canadian.

There are two paintings by Joseph Swift on offer, both equestrian-themed and both having pre-sale estimates of $12,000-$15,000. One is of a horse named Manfred, the other Royal Exchange. Smith spent much of his artistic time filling a growing need for recording prize-winning animals, often shown at the Toronto Exhibition for proud owners in the latter part of the 19th century.

Homer Ransford Watson will also be represented twice in the sale, once with a monumental (34 inches by 44 inches) unframed oil on board, one of a pioneer (or farmer) traveling along a trail by horse-drawn carriage, titled The Hayrack (estimate: $8,000-$12,0000; the other a lovely outdoor scene of a boy closing the gate on his flock of sheep, signed (estimate: $4,000-$6,000).

Good things will happen yet a third time with a pair of oil on board paintings by John Joseph Kenyon, the photographer-painter. Like the Swift paintings, these are also equestrian in nature. Kenyon painted money portraits of the winning horses at race tracks in New York and Kentucky. These two, titled Petrocleus (1904) and Lexington, are each expected to realize $4,000-$6,000.

An American Jacob Spangle (Susquehanna, Pa.) flint Kentucky rifle, having a 34 ¼ inch, .45 calibre barrel, a tiger maple stock in exceptional condition and brass furniture has an estimate of $5,000-$7,000; while an American-made Stevens Walnut Hill rifle, of the type made from 1896-1930s, having a nicely engraved frame and a Swiss butt plate, should command $5,000-$7,000.

In the furniture category, a painted pine linen press, made circa 1940 and found north of Oakville in Halton County (Ontario), the case of one-piece construction with two doors, is estimated at $5,000-$7,000. Also, a late 18th or early 19th century Pennsylvania pine corner cupboard with swan and neck pediment, reeded pilasters and gothic glazing, should achieve $4,000-$6,000.

Miller & Miller Auctions, Ltd. has two more online-only auctions lined up for the balance of 2021: a Watches & Jewels auction on Saturday, November 20th; and a Petroliana, Breweriana & Advertising auction on Saturday, December 4th. Like those before it, both will be Internet-only.

Miller & Miller Auctions, Ltd. is Canada’s trusted seller of high-value collections and is always accepting quality consignments. The firm specializes in watches and jewelry, art, antiques and high-value collectibles. Its mission is to provide collectors with a trusted place to buy and sell.