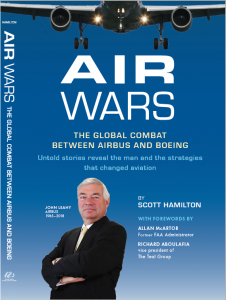 Air Wars, The Global Combat Between Airbus and Boeing

A new must-read book that reveals the man, the strategies and the untold stories that changed aviation.

BAINBRIDGE ISLAND, WA, US, November 18, 2021 /EINPresswire.com/ — Volumes have been written, examined and analyzed about the dynamic competition between Airbus and Boeing. But nothing has delved into the backstories, revelations and fateful decisions as you’ll find in Air Wars – The Global Combat Between Airbus and Boeing, written by internationally renowned aviation expert, Scott Hamilton of Bainbridge Island, Washington.

Air Wars is an historical examination of the intense rivalry between the two largest commercial aircraft companies in the world: Airbus and Boeing. Little known stories and behind-the-scenes wrangling daylight the people and events as each tried to out-maneuver the other to claim the #1 status. What’s also unique about Air Wars is the story about how one man, John Leahy, employed sales and product strategies that impacted not only Boeing and Airbus, but aviation, as we know it.

After conducting dozens of interviews with aviation legends, leaders and behind-the-scenes players, Hamilton drew upon his 35+ years of reporting archives to weave together the real story of one of the greatest global business competitions ever detailed. Air Wars examines groundbreaking sales strategies, unprecedented scandals, anecdotal stories, launch or not-to-launch new airplane decisions, how Airbus was more willing to make risky sales moves than Boeing, and how Airbus surpassed Boeing in key markets around the world.

About the Author
Scott Hamilton began his career in commercial aviation in 1979 with the original Midway Airlines, the first new airline to be certificated as part of the move toward deregulation in the United States. After working for several new-entrant airlines, Hamilton became an airliner reporter and editor for trade magazines. In 1989, he co-founded Commercial Aviation Report, Commercial Aviation Events and later, Commercial Aviation Value Report. In 1999, Hamilton created Leeham Co. LLC, a consulting company, and Leeham News and Analysis, an on-line, subscription-based analytical newsletter.

What readers have to say about Air Wars:
“A tour de force look behind the curtain of the Boeing and Airbus global competition, and in part a biography of John Leahy, the man who forced Boeing’s hand to re-engine the 737. As he always does, Hamilton tells the story of the biggest business brawl in recent decades.”

“Scott has written a lively and candid successor to “The Sporty Game.” Scott’s breadth of access to industry luminaries, who spoke so candidly, really made this book. Even in retirement, Connor, Leahy and others are like war horses who continue to throw grenades while at the same time, offer candid mea culpas on the part of the company’s arrogance, product short-comings and billion dollar miscalculations.”

“Scott also highlights the very broad scope the commercial aviation industry has in this global world. Above all, he also superbly demonstrates the impact personalities in the managerial positions do have on the business, their role for good or bad. AIR WARS: a fascinating read, also for non-aviation geeks!”

“Hamilton turned a straightforward business book into one that will give flyers a remarkable new understanding into the complexity of aircraft manufacturing, commercial aviation, aviation safety, high finance and bare-knuckle competition at the highest levels of global commerce.”

“This book should be of compelling interest to MBA students, current and future corporate managers, and serious investors.”

“A lively written, fantastic read covering four decades of the battle between Airbus and Boeing. It brings to life the triumphs, defeats, scandals, tragedies and often tough reality of competition in an oligopoly, featuring the actual players involved at every stage.”

“As an aerospace reporter, I was there for much of the last decade, and I can count on one hand the people who rival Hamilton’s industry connections and his grasp of details. He draws on both to tell the story of the biggest business brawl in recent decades.”