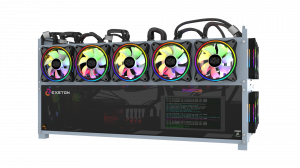 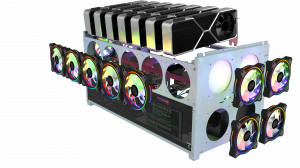 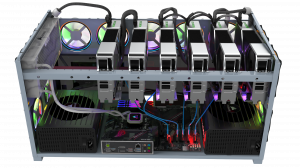 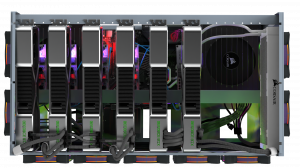 MONTREAL, QUEBEC, CANADA, November 24, 2021 /EINPresswire.com/ — Crypto miners originally started mining with CPU power back in the beginning days of the digital currency revolution. Before long GPU’s took over, and no wonder, being able to complete higher amounts of calculations in a shorter timeframe than their CPU predecessor positioned GPU’s at the top of the food chain in the race to secure a block in the chain. It wasn't much time after this that the ASIC’s moved onto the scene. Whereas in the past, miners were repurposing already built devices that enabled them to mine, ASICs were devices built for the sole purpose of mining. Microprocessors housed inside a small closed-off frame with cooling systems enabled breakthrough hashrates never before seen. But everything comes with a price and as the volatile crypto market rose and fell before our very eyes, so did the value of ASIC miners.

One of the biggest issues with ASIC miners is flexibility. ASIC’s must be built to mine a specific algorithm and cannot be changed, because of this, it leaves ASIC’s open to a lot of profit fluctuation and limited options for when coin value drops.

At the same time that ASIC’s were flooding the market, a new form of GPU mining system was being employed. Miners used innovative thinking and started to work towards a more efficient and powerful means to utilize GPU power. GPU’s don’t run into the same issues that ASIC’s do regarding coin flexibility because GPU’s are not built with a specific algorithm in focus, miners are then free to pick and choose whichever coin is most profitable at any given time. This flexibility to choose which coin to mine makes GPU’s a powerful, sustainable and financially smart choice when it comes to crypto mining.

This is where GPU mining rigs step in.

What is a Mining Rig?
Imagine a purpose-driven, hand-built computing system with the sole function of housing multiple GPUs in one place and hitting high hashrates with efficient power usage. The components required are fairly straightforward, and anyone that has built their own PC will have a good understanding of how it all fits together. Miners have two options when it comes to getting set up with a GPU mining rig. They can build their own rig by purchasing the necessary hardware and assembling it in their own time, or miners can save the time and hassle associated with procurement and building by purchasing a pre-made rig designed by a dedicated tech company.

Let’s have a look at what's inside one of these dedicated mining rigs. Let me introduce, the Exeton Phenom lineup by Viperatech.com.

Viperatech, an eCommerce tech company with a focus on highly sought after, cutting edge technologies invested early in the cryptocurrency mining hardware industry and together, with deep background knowledge of the required components and a highly trained eye for detail created a unique powerhouse of a machine for crypto mining.

Viperatech calls this lineup Exeton Phenom and they have pulled out all the stops to ensure the highest hashrate to power efficiency possible is met with these new GPU rigs. What’s inside the box? Let's take a look.

To house the GPU’s and dedicated mining components, Viperatech employed the use of a 3D modeller to design a one of a kind, stackable open-air frame with a built-in 5” touch screen.

Inside this frame they added an Asus X570 Prime motherboard with improved memory overclocking and next-gen connectivity, the X570 Prime is built to handle up to 7 graphics cards and is geared up for the demands of high-core-count processors, offering a stable power to ensure optimal performance.

For the heavy workload of mining, Samsung’s 860 Pro SATA SSD has been included, helping to sustain consistent speeds. The 860 Pro is capable of read speeds up to 560MB/s and write speeds of 530 MB/s. With 512 GB of memory and Samsung’s innovative V-NAND technology, the 860 Pro provides industry-leading endurance to give miners peace of mind.

Viperatech’s background in crypto hardware and computing technology allowed them to intelligently choose a RAM that would allow flexibility on the part of the miner and stability to the design. For this reason, they added 32GB of RAM from Corsair Vengeance which has been optimized for performance for AMD ready DDR4 motherboards.

AMD 7 5800X processor has been included with boost clocks up to 4.7 GHz2, 8 cores, 16 threads, and 36MB of cache. This allows for maximum performance and control of overclocking which in turn allows for optimal efficiencies.

With all this tech in the box, things can start to heat up pretty fast. To maintain stable temperatures the Exeton Phenom lineup utilizes a Corsair liquid cooler H100i SE. With each fan running from 360 to 2,200 RPM while in operation combined with a thermally optimized cold plate and low-noise pump design, the H100i delivers high performance and quiet cooling. Considering temperature control is an extremely important aspect of crypto mining, Viperatech also installed 13 120mm CoolerMaster Halo RGB fans. Together, they keep temperatures cool and noise at a minimum.
Premium Risers VER009S are used to separate the GPU’s inside the frame to enable efficient cooling and heat dissipation.

To power this specialized mining rig a Corsair AX1600i or AX1200i, depending on the model, has been included. With a 94% efficiency and an ultra-stable 80+ Titanium power efficiency, these are ideal choices in an industry where power efficiency can be the dealbreaker between great profits and mediocre gains.

Mining power ultimately comes down to the GPU and Viperatech have delivered outstanding options to those looking to enter or grow with the crypto industry with their custom Exeton Phenom rigs. There are currently 8 rig options available for order, all housing different GPU's with different hashrate and power efficiencies. Let’s dig into some of these options and see what they are capable of.

Exeton Phenom N7 LHR
LHR is a process Nvidia has applied to some of their GPU’s to stop them all from being bought up by miners and leave some for gamers and PC enthusiasts. Nvidia realized that stocks of popular GPU’s were being bought not by gamers and creators for which they were intended, but instead by crypto miners. This prompted Nvidia to create a variation on their graphics cards. Any LHR GPU has additional software included which identifies if the graphics card is being used to mine crypto on the Ethash algorithm and reduces their hashrate considerably. This means that coins like Ethereum, Etho and Metaverse have diminished returns with LHR GPU’s. Coins that do not exist on the Ethash algorithm are not affected so LHR GPU’s are still great choices for alternative coins like Ravencoin or Ergo. The Exeton Phenom N7 LHR boasts 7x LHR Nvidia 3080s and will collectively mine with a hashrate between 385-420MH/s. Depending on the coin chosen and its given market value, the Exeton N7 LHR should be able to bring in daily profits of around $35 (USD) and hit its ROI within 18 months.

Exeton Phenom N7 CMP
The N7 CMP is the leader of the pack, boasting 7x Nvidia 170HX CMPs. The CMP 170HX is an impressive miner and holds some of the highest hashrate power amongst all the graphics cards available today. Nvidia designed the CMP lineup specifically targeting the cryptocurrency mining industry and they did a great job creating a powerful and efficient GPU. The 170HX is capable of hitting 165MH/s independently, when combined with 6 more of the same, it cranks up to an impressive 1.15TH/s. A single CMP 170HX is capable of around $12 (USD) daily income. All 7 combined can reach a daily income of $84 (USD), a total monthly income of $2,520 (USD) and a total of $30,204 (USD) in the first year. ROI would be within 13 months based on today's market value.

All of Viperatechs premium GPU mining rigs come with a 1-year warranty on CMP cards, a 3-year warranty on parts and 24/7 remote technical support, something that is highly sought after in the crypto mining industry. Rigs are designed to work on Linux, HiveOS and Windows 11 depending on the model.

Some of the ROI here might seem long but with the added flexibility GPU’s offer, they provide a safer, cleaner and more workable structure that miners can tweak and adjust as the market changes and evolves. If for example one month Ethereum dips and is not as valuable, GPU miners can simply switch the coin they mine and keep hitting high profits. However, the same is also true, if Ethereum rises swiftly and hits a record high, GPU mining profits on the Ethereum network would also rise.

Another benefit to GPU mining over ASIC mining is usability and resell value. ASIC miners are pushed to the side when a more powerful ASIC enters the market, that’s because ASIC’s are not upgradeable, which means they struggle to perform with new hardware. GPUs and the rigs they rest in are all upgradable and parts can be swapped out with ease. ASIC miners also do not come with much of a warranty and resale value is a very volatile system based on many of the factors we have already discussed. This is where GPU mining shows its true colours with industry-backed warranties and high resale value.

Sometimes we move towards the direction of advanced technology without accurately depicting its pitfalls. Thankfully GPU mining avoids a lot of the negative factors of crypto mining and provides a more stable solution for anyone interested in investing in the industry.